I have seen people follow individuals just because of the great spiritual gift(s) they have, assuming that they MUST be right to have such a gift and such miracles.  However, that is a dangerous road of assumption.  God gives gifts and callings and they never go away - even when the person walks away from God and sins.  They still have the gift or calling!  (Romans 11:29)  That is why we are told in God's Word to rather, judge a tree by its fruits: 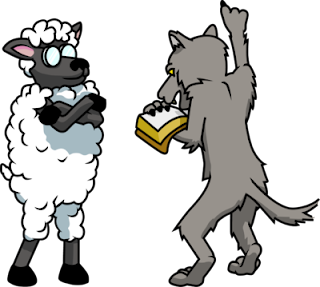 Beware of false prophets, which come to you in sheep's clothing, but inwardly they are ravening wolves.  Ye shall know them by their fruits.


Don't look at the signs and wonders, the gifts, the miracles, great speech, etc. - LOOK at the fruit of that person's life!  Do they show love?  Meekness?  Self-Control?  Gentleness? etc.  It has been said with cults, never look at their beliefs or doctrine, as some can have their doctrine just exactly right - rather, look at their ACTIONS!  What do they do?  Are they full of the fruits of the spirit?  Most of the time cults are not, they are controlling, manipulative and use guilt tactics to have power over people in a lording sort of way, which God forbids!  It is actually the spirit of witchcraft these cults use as witchcraft is making others do what you want them to do.  God doesn't even do that as He made us with a free will!  The Holy Spirit sure doesn't do that.  Yet, some cults, even in the name of Christ, will use witchcraft to make people do what they want.  And usually, they were started by a man who had some great gift or calling at one time yet fell to something - whether it was adultery, pride, etc. and people followed the man because of his great gift or calling, and blindly continued to follow in idolatry.

This is why as you read of many of the miraculous leaders throughout our time, people wonder HOW they could have done those miracles and yet live in sin at the same time.  Think of Jim Jones, he was a very great man in the beginning, as there are people that can attest to that who knew him and followed him.  However, he went out of his mind at some point and was overcome with the spirit of witchcraft to control people.  You may know the rest of the story, how these idolators did everything he said, even drinking the kool-aid and they died.  You can NOT follow a man, you only follow him as he follows God and if he stops following God and starts using Satan's ways of control, etc. - RUN!!  We are commanded by God to watch out for these false prophets by judging them against God's Word and that is why people fall to cults of all kinds - they didn't count God's Word or His Holy Spirit as #1!

Think of what wolves do.  They attack the sheep.  They tear them apart.  They ruin the flock!  They fleece and waste the sheep.  If you really think on that and compare your Pastor to that, you will know if you are truly under a wolf.  I'm thankful that my Pastor does none of that and never has to anyone in his 49 years of preaching the gospel!  He rather has the fruits of the spirit and is a gentle man but don't be fooled - he can preach hard things and rebuke but does it in love and you don't feel attacked by Satan but rather convicted by the Holy Spirit.  Thank God for Godly Pastors that love, care and feed their flock!!  God tells us what a true Pastor will be like:


Feed the flock of God which is among you, taking the oversight thereof, not by constraint, but willingly; not for filthy lucre, but of a ready mind;  Neither as being lords over God's heritage, but being ensamples to the flock.


For there shall arise false Christs, and false prophets, and shall shew great signs and wonders; insomuch that, if it were possible, they shall deceive the very elect.


For false Christs and false prophets shall rise, and shall shew signs and wonders, to seduce, if it were possible, even the elect.


We already saw that Satan has the ability to do signs and wonders, that is why we must not follow after those things alone!  Come on, read your Bible and don't be deceived!

On the flip side, we need to respect those with spiritual gifts and allow them to be used in the church, as this is what God created the church to work like!  If you go to a church that doesn't allow anyone in the congregation to exercise spiritual gifts, guess what!?  You are in a cult!  Of course they wouldn't want people to use their spiritual gifts, most especially those with the spirit of discernment - because then, they would be found out for what they are!  They would be exposed to be the false prophets that they are.  Therefore, it makes much sense that those with the spirit of discernment are the hardest hit by Satan.  Satan is well-aware of their gift and knows who has it!  He will do all he can do to discredit that person so their discernments are not allowed or received.  With the other gifts, don't worship that individual for the great things that are done through them, but rather let their gift help the flock.

Find a church that allows the spiritual gifts to operate!  Each church will have all the gifts, as God is the one that gives them out to whom He chooses.  Next, don't follow after some man (or woman), just because of their great spiritual gift or oration abilities!  Measure your Pastor always by God's Word and if he veers off course and doesn't change, find another one.  We are nearing the end, if not there already - and must be watchful and mindful and know God's Word for ourselves because we won't be judged by what so-and-so said, we will be judged by the Word of God, which we had access to.  If you go to church where the Pastor is threatened by your questions or expects you to take his word for it and not search the scriptures - RUN!  You found a false prophet.  A true man of God, will rather encourage you to search the Bible and he won't have a narcissistic-ego that is offended that you would question him.  Think of fruits - it will tell the tree!