What Will Really Matter?

Who would have thought I would have gotten a blog post from a menopause video but I did.  No, I'm not in menopause but I'm preparing for the future so I can do it in the most natural way.  I found some interesting information from history that I had no idea about it and so far, everyone I've shared it with had no idea either.  Menopause is actually a modern problem because up until the 1800's, women's life expectancy's didn't go past age 50!

In Ancient Rome, women normally only lived until age 25!  In Renaissance times, most women rarely lived past age 35!  By the Victorian era, they were living till age 45 and it wasn't until the beginning of the 1800's that they lived until 50!  Today, it is around age 80 that we can expect to live on average as women.  WOW!

Here is a chart showing average life expectancy for men and women from the 1850's to 2000 showing how much longer we live now: 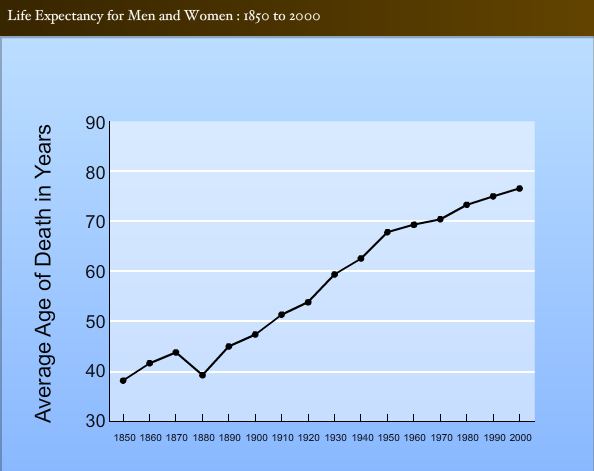 
Think about that for a while - I probably would have been dead had I lived in Renaissance times!  Now, I probably could have a good 45 more years to go.  Amazing how time changes so many things.

This, along with a message that was preached recently, reminded me of the importance of what really matters.  Ultimately, it is God, salvation and living for Him but as women, our importance besides that comes from what?  We don't start churches.  We don't pastor or preach (generally).  So what are "we" doing for God as women?

This is something that most women forget to think about until it is too late.  Well, I decided years ago that I didn't want to be "too-late Nanci!"  I want to be right-now, no-regrets Beverly!  I still need reminders when my priorities get out of sync but I always come back to God and my family - being that wife and that mother training my children, so that they can continue on the legacy that our family is.  That which is done for Christ, the modeling of the minds of our children to know Him, is what will last.

I will leave you with this great quote from the video I watched from Dr. Low Dog that sums it all up so well:

A hundred years from now, it will not matter what kind of job women had, what she did, what kind of house she lived in.  The only thing that will probably really matter, is how well she taught her children, her neighbors and her grandchildren.