The Story Behind the "TV" Stand/Window Seat

We purchased a TV, not cable or anything, but an actual TV monitor, along with the Amazon FireTV and a TV stand.  I don't even like the word TV - and some of you may remember why in posts from year's past about how the TV was my enemy as a child, at least in my mind.  We didn't have one until I was 9 years old and it took away my parent's attention and my sister's and it caused a host of other things.  It was the enemy.

So, when I sat and reasoned what was different from having a "TV" screen that was 43 inches from our Kindle Fire - I couldn't come up with much difference, other than the obvious size.  It wasn't like we were getting cable television or even going to watch bad things.  I couldn't even press the button to purchase the thing, I had my daughter press it.  From that moment on, even when it was here, I felt horrible.  I would wake up in the morning and see it and it would turn my stomach.  I couldn't stand having the thing in the house.  I did like watching our history videos on WWI and YouTube channels I like but there was just something about it that bothered me.

I figured out it had to probably do with my past experience and I was just going to work that out myself and let my family enjoy the big screen's benefits.  However, I didn't like that it caught my daughter's attention so much to where that is all she wanted to do or look forward to doing was playing games on there.  My husband doesn't even watch movies, so he wasn't using it.  I finally decided to just keep the thing and not let my personal issues get rid of it.

That is when my husband said, "I don't want the thing in the house."  He couldn't even stand to say the word, "TV" either.  When I drilled him about it, he said that greater men than him have fallen to this thing and sinned and he didn't want to sin.  He didn't feel like he would sin with it but he didn't want that door there.  My heart sank - wow!  It was then I realized that it wasn't just my issues with my past but my husband also realized the potential of this beast and so we sent it back.

He had already put together the "TV" stand and didn't want to return it, so I was wondering what in the world we were going to do with it, probably sell it.  Then, I saw this space between our bookshelves in the dining/homeschool room and I asked my husband to measure it and wouldn't you know, it fit perfectly!  It makes a great little window seat for my toddler, as it holds 90 pounds and it is great storage for his learning toys. 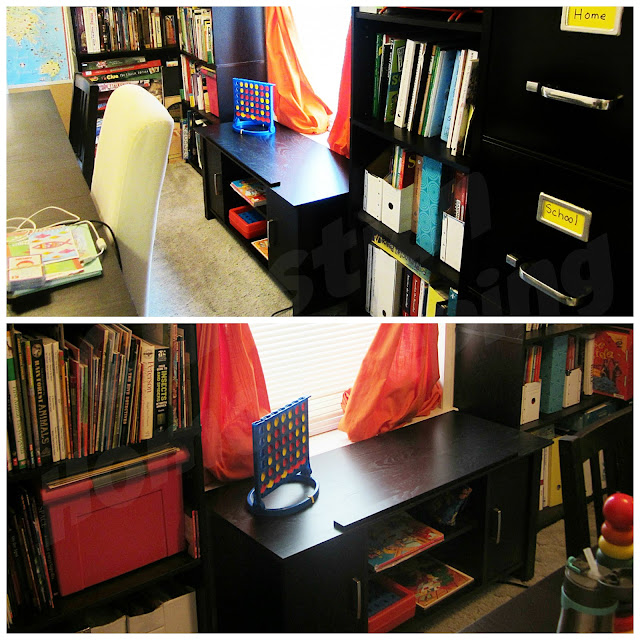