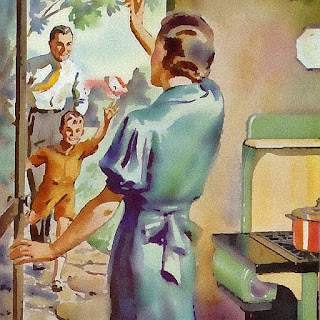 Homes all over America, and even the world, have had the most crucial post abandoned - that of the Keeper at Home.  In times past when women were at their post as keepers of their homes, there was less divorce, less juvenile delinquents, less psychiatric issues, less adults trying to find love in all the wrong places and on and on.  Women were at home and there was always someone there to have the home ready, meals to eat and to care for the sick.

Now, when faced with a virus and schools closing, we have a surge of women demanding somebody else do their job yet once again.  They're demanding the government step in and provide childcare.  You can't possibly ask a mother to stop working and stay home with her kids!?  For a lot of children, their parents don't provide even their basic food, they depend upon the schools and now they're demanding the government continue to pay for their children's food since schools are closing.  Ultimately it is up to the father to provide but since woman has decided she wants to be a man and do his work, guess she'll have to man-up and deal with everything that comes along with being a man.

Women need to return to their posts at home!  There needs to be a keeper at home.  Why do people think this isn't important but now we can all see it is actually extremely important.  If women had been at their post, there wouldn't be so much chaos right now in so many homes.  Guess what?  Homes need a woman fulfilling her Godly role AT home!

Every wise woman buildeth her house: but the foolish plucketh it down with her hands.


It isn't just working mothers that abandoned this post, there are even women who are AT home but are not keepers at home.  They are lazy, wasteful, selfish, spend all their husband's hard-earned money, they won't learn to do homemaking skills, they sit around on Facebook or watch Netflix and get fat, unattractive and neglect their husband's needs and their children!  There are actually women that work that do MORE than some lazy homemakers - it is true.

1. A good wife is a great blessing to a family. By a fruitful wife a family is multiplied and replenished with children, and so built up. But by a prudent wife, one that is pious, industrious, and considerate, the affairs of the family are made to prosper, debts are paid, portions raised, provision made, the children well educated and maintained, and the family has comfort within doors and credit without; thus is the house built. She looks upon it as her own to take care of, though she knows it is her husband's to bear rule in, Est_1:22. 2. Many a family is brought to ruin by ill housewifery, as well as by ill husbandry. A foolish woman, that has no fear of God nor regard to her business, that is wilful, and wasteful, and humoursome, that indulges her ease and appetite, and is all for jaunting and feasting, cards and the play-house, though she come to a plentiful estate, and to a family beforehand, she will impoverish and waste it, and will as certainly be the ruin of her house as if she plucked it down with her hands; and the husband himself, with all his care, can scarcely prevent it.


Wow!  I've always believed that if my husband puts in 8 hours a day (he actually does more than that) of work on a job, I better be putting that amount of work into my "job" at home!  We can not afford to abandon our posts ladies!  We are the hand that rules the world - we fashion and form the future generations' work ethic and morality.  Your children will be the best representation of you to others.  What goes on at home, shows in the children outside the home.  It isn't just the children, they say behind every good man is a good woman, and how true that is.  Women hold it all in their hands - they will make or break their homes.

*As with anything, there is the exception - widows and divorced or unwed single mothers, although some put themselves in that predicament and have to face the consequences.  We should, as I blogged about - be making sure the widows and orphans are taken care of during these times.