In light of the recent school shooting, we seem to notice just how bad it really is in children's lives these days, yet there is never actually anything done to fix it.  Taking guns away will not only NOT fix it, it will make us ALL vulnerable to criminals, who WILL get guns somehow - just like they manage to get "illegal" drugs.  Look at how crazy everyone is acting!  Fighting and pointing fingers with one another.

Everyone seems to ignore that this shooter, this orphaned boy, was hurting extremely bad.  Not only was he supposedly given up by his real, biological parents, but his adoptive father died when he was a child and his adopted mother died this past November.  It didn't stop there.  He was bullied relentlessly at school for how he acted or behaved.  He couldn't have been expected to act normally because he had already been rejected by his birth parents and then lost his adoptive parent (and later on the 2nd).  His emotions were probably running wild and combine that with growing up and hormones and then the whole ungodly, public-school culture and you end up with a recipe for total destruction of a human spirit!!!  It was brought to the attention of staff at school but no one did anything about it and that hurt him even more.  He was treated as an outcast as though it was HIS fault he was the way he was.  The poor boy was hurting and screaming for help and all he ever got was tragedy and mockery!  The woman that took over for his mother after she died, showed her main goal ONE day after the shooting - she rushed to file a paper to make sure she got his inheritance from his dead mother, to the tune of $800,000 and she quickly tossed his brother involuntarily into a mental institution.

What we have here is not a case of an evil boy destined to kill.  We have a very, very hurt boy, who through hurts, rejection, abuse and having those who cared for him taken away, had an open door for demons to come in one by one.  Full of demons, he did whatever they said and did the unthinkable.  He could now finally have PROOF that he was a very bad boy unworthy of love.  God help him, deliver him from his demons and let him feel that he is loved by someone - by you and God! 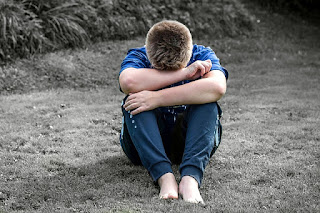 Public school is a place that Satan rules and God isn't allowed.  The place where teachers spew their biased, liberal, anti-God rhetoric in between bites of actual book learning.  What kind of things should we expect out of such a place!?  It is full of children, whose mother's have shuffled the responsibility of their education off to others (and forced us all to foot the bill for it) and chased the mighty dollar and career.  It is full of children hurting because they are without love and care and just want their mommies!  They are hurting so bad, they start hurting each other by bullying.  All bullying is, is hurt children taking it out on others, what they themselves don't understand.

What is so appalling to me and always has been, is that people that call themselves Christians, freely hand their children over to these prisons of evil.  They boast in unison of how they are "free" of their hindrances, so they can do other things, you know... important things like sitting on their rump, scrolling through Facebook or posting lascivious photos of themselves so another man can lust after them.  Meanwhile, little Johnny's head is being filled up with all manner of anti-God rhetoric and learning to love the "world" as he desperately tries to fit in to this culture called the public school.

It isn't just school choice.  Little Johnny doesn't even know what is a man or woman anymore and his mother sure isn't helping by dressing like a man and working like a man!  Women are partly the cause to this gender confusion, they, quite frankly started this mess by cross-dressing.  Children are CONFUSED and roaming the school halls for answers.

Mothers need to quit their jobs, put on feminine dress and act like a woman and school their own children!  There is no better place than the place where God ordained children to be - at home with their mothers.  When you wake up and realize just what you have caused, you should weep, repent and make it right if there is still time.  If your children are already grown, you can still weep and repent and take it before the courtroom of the Almighty God and ask Him to fix what you messed up.  Then, warn others - like I'm doing because my own mother told me to in her stead.

*It should be noted that we probably will not end school shootings, as it is nothing new.  The first school shooting was in 1764 by Indians, with a student doing the shooting by 1840.  This post is to bring attention to mothers to help prevent their own children from being so hurt to do such an act.