This Week of Vegan Meals

We tried several new vegan recipes this week and they were ALL very good!  They all came from this new cookbook I bought from Nisha Vora - The Vegan Instant Pot Cookbook. 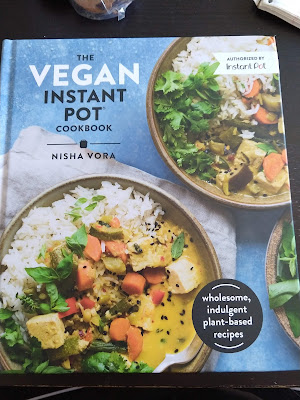 The first meal I tried from this cookbook was Tofu Tikka Masala because we already love Chicken Tikka Masala, so we wondered how the vegan version would be.  It was absolutely delicious!  It consisted of tofu that has been marinated in coconut milk, cumin, garam masala, turmeric, and cayenne pepper.  Then, cauliflower, onion, garlic, tomatoes, and lemon and lime juice with seasonings of cumin, ginger, garam masala, paprika, coriander, turmeric, cayenne pepper, sugar and cilantro.  The best part was the cashew cream!  To make that, I soaked the cashews and then in a food processor mixed in soymilk, lemon juice and sauce.  All this served over basmati rice. 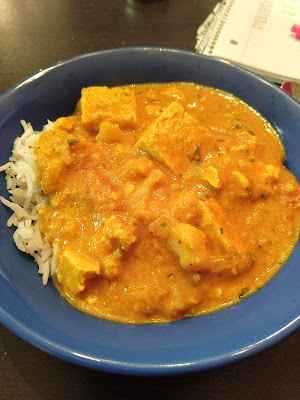 The next recipe we tried was Chickpea Vegetarian Biryani, which is another Indian dish.  This was by far my favorite because not only did I have seconds at dinner, I ate it for breakfast the next day and again for dinner the next day!  The dish includes chickpeas, tomatoes, vegetables (I used carrot/cauliflower/broccoli mix), raisins, cashews, onions, garlic and basmati rice with seasonings of cardamom, cumin, cloves, bay leaves, cinnamon, ginger, coriander, turmeric, garam masala and lemon juice and cilantro.  You make a homemade Raita sauce to put on top, which is cucumber, nondairy yogurt (I used unsweetened soy), garlic and ginger, cilantro, cumin and garam masala.  Some spices I left out because I didn't have were fresh mint, fennel seeds and serrano pepper. 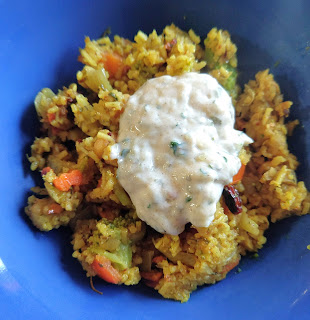 Then today, I made West African Peanut Stew over basmati rice and this one was another winner.  It was sweet potatoes, chickpeas, peanut butter, kale, tomatoes, garlic and onions over rice.  Again, many, many spices like all of Nisha's recipes so far.  Coriander, ginger, cumin, turmeric, cinnamon, cloves, cayenne, cilantro, salt/pepper and lime juice. 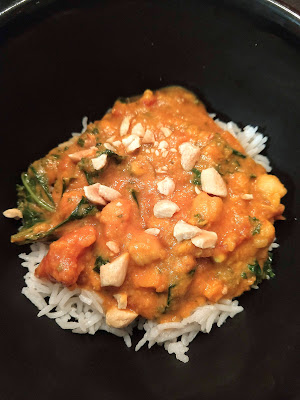 Every recipe I've made in this book was a 5-star!  I can't wait to try even more recipes.  Nisha has a YouTube channel as well with great videos on cooking and a lot of ideas for batch cooking at the beginning of the week.