So far in this series we did an overview in Part 1 here and then in Part 2 here we went into detail on the 6 things God's sheep do.

The 6 things that God's sheep do as we discussed already are:


I've always believed that God doesn't give anyone wealth for them to go buy enormous amounts of luxury things. I believe God gives wealth so that they can help others. If God has given you more money, or even a substantial amount such as a millionaire, you would naturally help more people than the average person could. Surely, a Christian who comes into wealth, will see that God has blessed them so they can bless others in large ways. 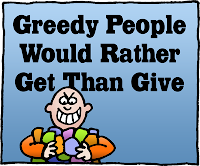 Pleasure is ruining a lot of Christians! We have laid in our American bed-of-ease for far too long with no care or concern for the above 6 things. The sheep have turned into goats and they will be surprised, as Matthew 25 shows us, when they say: "Then shall they also answer him, saying, Lord, when saw we thee an hungred, or athirst, or a stranger, or naked, or sick, or in prison, and did not minister unto thee?" If you don't do these things for your sister (or brother), you aren't God's sheep. There really is no pass given in these verses - God has clearly outlined what your character as a true sheep of God will be - one that is about helping others and that is unselfish.

Matthew Henry says it very well in this commentary:

When I was in these distresses, you were so selfish, so taken up with your own ease and pleasure, made so much of your labour, and were so loth to part with your money, that you did not minister as you might have done to my relief and succour.


Dear God don't let us ever become so loving of our money that we can't part with it to help another have relief!  God didn't give us money to meet just our needs and wants, He gives us extra past that to help others.  I notice a lot of the time that the ones without much actually give more.  A poor sister may give all she has or give what she really needed to someone else.  Then, the rich sister with plenty to spare, won't even give a dime.  However, you can be rich and give as well - just look at Bill Gates!  What a heart him and his wife have.  What a great thing to be able to be in a position to relieve so many.


They are waxen fat, they shine: yea, they overpass the deeds of the wicked: they judge not the cause, the cause of the fatherless, yet they prosper; and the right of the needy do they not judge.


This verse pretty much sums it up - they are so full of themselves they could care less about the hurting!  Notice it says they OVERPASS the deeds of the wicked - they're far worse than the wicked because they live in the lap of luxury and don't care for the hurting - specifically the orphans and needy.  God's sheep are NOT like this!!

They have become great in the world; they have waxen rich, and thrive upon it. They have wherewithal to make provision for the flesh to fulfill all the lusts of it, to which they are very indulgent, so that they have waxen fat with living at ease and bathing themselves in all the delights of sense.
The fatherless are often needy, always need assistance and advice, and advantage is taken of their helpless condition to do them an injury. Who should succour them then but the great and rich? What have men wealth for but to do good with it? But these would take no cognizance of any such distressed cases: they had not so much sense of justice, or compassion for the injured;

Wow!  They become wealthy and they spend it all on themselves.  What a waste!  Indulgent - Fat - Bathing themselves in delights - Selfish.  It would be good for a lot of us to quit fattening ourselves up and get to work helping others!

Thy princes are rebellious, and companions of thieves: every one loveth gifts, and followeth after rewards: they judge not the fatherless, neither doth the cause of the widow come unto them.

Give me, give me, give me!  This isn't the spirit that God's sheep have.  They don't run after themselves and stomp on the most afflicted.  This commentary from Matthew Henry sounds just like Washington DC politicians:

They love gifts, and follow after rewards; they set their hearts upon their salary, the fees and perquisites of their offices, and are greedy of them, and never think they can get enough; nay, they will do any thing, though ever so contrary to law and justice, for a gift in secret. Presents and gratuities will blind their eyes at any time, and make them pervert judgment.
Those will have a great deal to answer for who, when they should be the patrons of the oppressed, are their greatest oppressors.

The last part of that really says it all - They should be "Patrons of the Oppressed" but yet they are actually the greatest oppressors!  God's sheep aren't like this!  God's sheep will rather look to the oppressed than oppress them.  Notice how God has given the same theme throughout the Bible showing us examples of what His sheep DO and DO NOT do.