The Great Divide - Error vs. Truth in Our Churches

After having to live through story after story of unbiblical Pastors leading their congregations to defy the government orders and have gatherings at their churches - the President has now deemed it ok to congregate once again.  President Trump got the CDC to list churches as essential, so the closing of them can never happen again and so that all churches can now reopen without fear of violating Romans 13.

I honestly have been alarmed that a large number of Pastors and leaders of Christian churches in America thought it was ok and their "right" to defy the government and their leaders by congregating.  Romans 13 explicitly tells us that God is not OK for the defiance of rules, regulations, orders, etc from our governing bodies.  Yet, you have so-called leaders of God's people leading them to violate the Word of God in disobedience and thereby sin!  The blind leading the blind...  They have truly shamed the church as as whole by their behavior and brought a reproach upon Christians.

We refused to gather because even though the Ohio governor didn't place any restrictions upon churches in Ohio, he did request they don't: 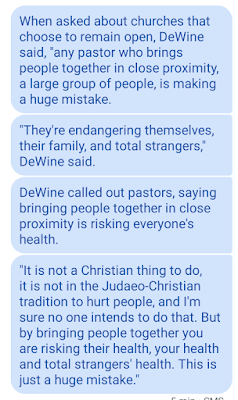 Out of respect to our great governor of Ohio, we considered our fellow man and remained at home doing online church.  Only now, after the President has declared it is ok, would we resume.  However, the power is still ultimately up to the state, we do still believe in that right?

This pandemic and all that we have seen has truly shown where the church lies.  We have a bunch of Pastors that don't know their Bible and can't rightly divide the Word of God and would lead their people into error.  Notice you will be mocked if you obeyed Romans 13 and stayed home.  Mocked for doing right - truly, calling "good" evil and their "evil" good, because that is what disobedience is.

I'm reminded of the Israelites who murmured for bread.  God simply gave them a rule - don't gather more than needed, it will rot and don't gather any on the Sabbath.  Did they listen? NOPE!  Times have changed, the story line has changed but people haven't changed.  They think they know better than God's Word.


Then said the LORD unto Moses, Behold, I will rain bread from heaven for you; and the people shall go out and gather a certain rate every day, that I may prove them, whether they will walk in my law, or no.


Six days ye shall gather it; but on the seventh day, which is the sabbath, in it there shall be none.  And it came to pass, that there went out some of the people on the seventh day for to gather, and they found none.  And the LORD said unto Moses, How long refuse ye to keep my commandments and my laws?


I applaud all the Pastors and church leaders who obeyed their government during this time despite it being against the religious "rights" of the Constitution.  God's Word of Romans 13 trumps any country's constitution.  Even though we were denied our constitutional rights, we should still hold firm in obedience to those that rule over us in government.  We have no biblical grounds to do otherwise.